Dear Friends of the Cains River :

In the spring I updated you on the Miramichi Salmon Association’s special project plans for conservation work planned for the Cains River in 2012. Rob Ginson, the fishery biologist hired by the MSA to replace Jenny Reid is in charge of the program that includes clearing the mouths of Cains River stream tributaries both in the summer – to provide cold water refuge – and in the fall to allow access for spawning, to remove beaver where there presence is excessive, and to stock Atlantic salmon fry grown in the MSA hatchery from wild Cains River stock. This e-mail contains a report on the summers work, and I think you‘ll be quite pleased with the progress. Certainly this warm, dry summer was one where the work was helpful to the fish.
Click to read full report with photos-

This has been a trying year, disappointing to both individual fishermen, camp owners, and especially to outfitters. None-the-less, sometime in the next few weeks the Cains will receive a good rain, and the fall run will come into the river to spawn. We will be collecting a small number of brood stock for spawning at the MSA hatchery, clearing away beaver dams at important spawning brooks along the river, and thinning the beaver population in areas of elevated population levels. This work must be paid for, and we can use your help. Here is link to the MSA website page containing the proper address for both U.S. and Canadian citizens to send donations that are tax deductible.

If your name should already be on here I apologize, but it may have not been clearly indicated on your donation that this money was for the Cains as opposed to a general donation to the MSA. Please let me know so that I can correct it, and you will be recognized on our annual recap later this fall.

I hope that you will forward this e-mail to all of your fishing friends. This work would be much better supported by all who enjoy the Cains than by a small number of private water owners. I encourage anyone receiving this e-mail to please contact me for inclusion on this mailing list. 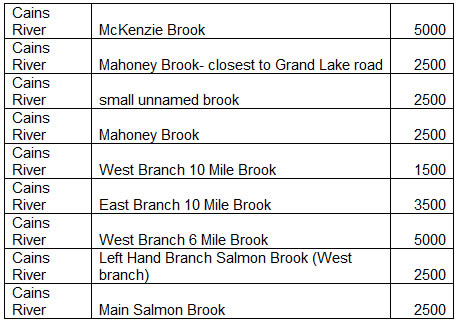 Cains River electrofishing Some of the stocked sites are currently being electrofished to determine if the stocked first feeding fry were successful as well as to identify new areas that have low fry and parr abundances and are therefore good candidates for stocking next year. The following table shows the Cains River sites that will be electrofished this year, six of which are sites that had been stocked in 2012 to determine success of stocking. 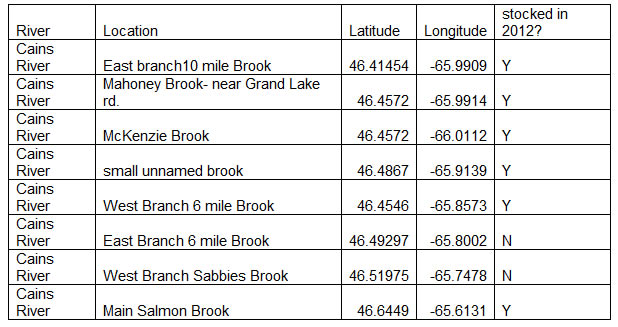 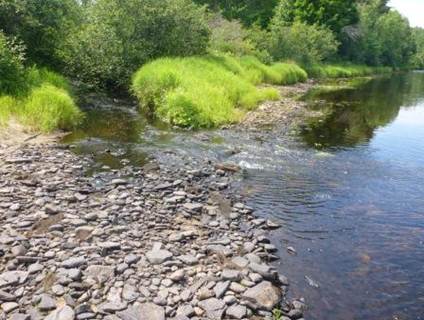 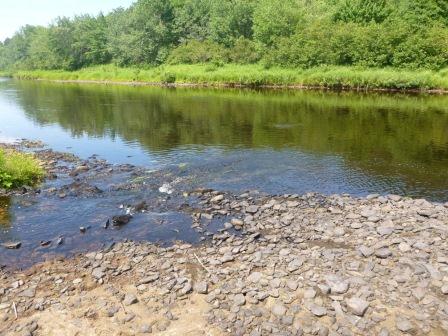 Figure 1: 10 Mile Brook with no beaver dam present near the mouth so cold brook water can flow freely into the Cains River. We obtained video evidence of brook trout, juvenile Atlantic salmon, and other fish species using the brook for cold-water refuge.

Figure 2: McKenzie Brook showing no flow coming out of the mouth of McKenzie Brook into the Cains River. Hidden behind the leaves is a large beaver dam which has obstructed the brook flow. 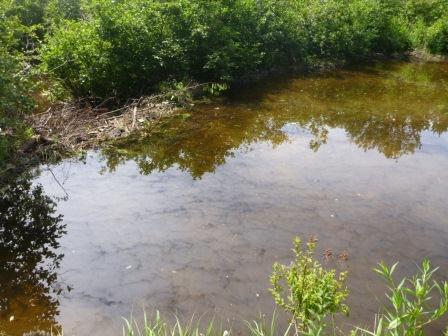 Figure 3: 30 feet from McKenzie Brook mouth there is a large beaver dam that needs to be removed in order for the cold-water from the brook to enter the Cains River. A large pond of warming stagnant water above the beaver dam has formed. 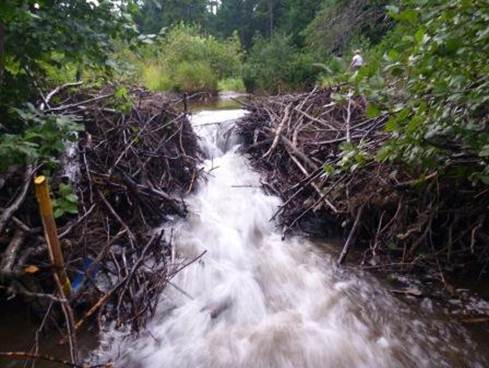 Fig 4: Water flowing through the McKenzie Brook dam after it had been breached. Also, to ensure the beavers no longer rebuild the dam, at least for this year, a nuisance trapper has been hired to remove the beavers from the area. 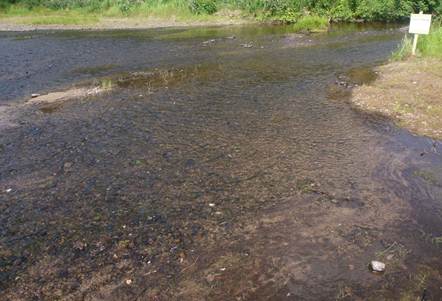 Figure 5: Mouth of Salmon Brook in the Cains River showing evidence for a possible brook mouth restoration project. The water velocity from this brook is lost at the mouth and this restricts its potential cold-water input into this Cains River salmon pool near the brook (pool was closed due to warm temperatures, as evidenced by the DFO sign).