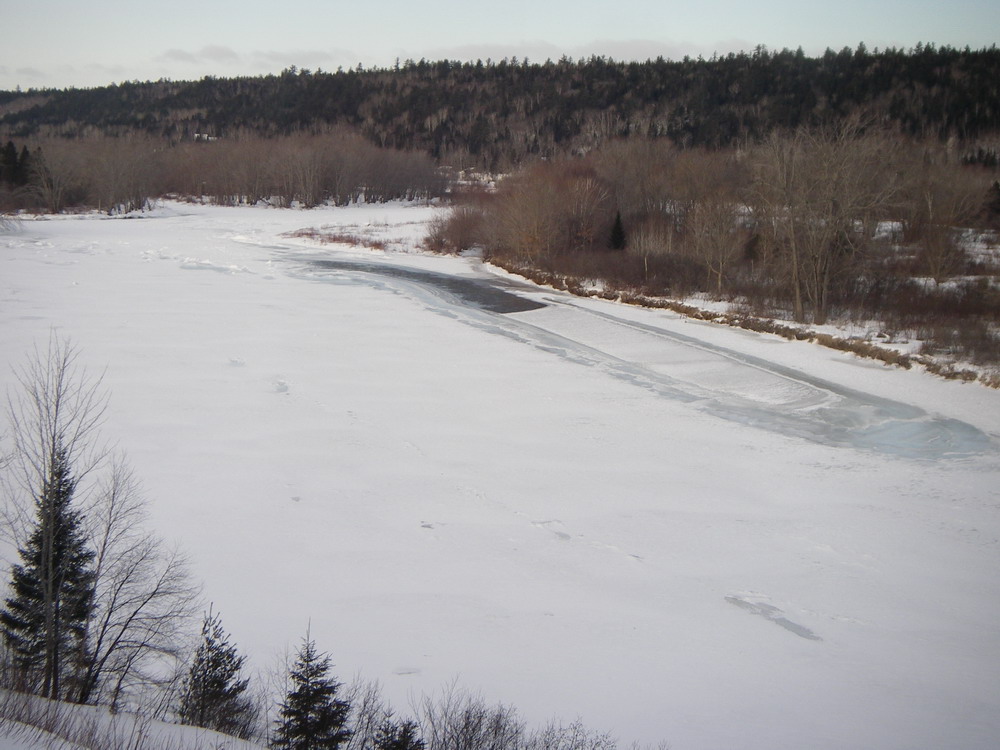 How Atlantic salmon overwinter in rivers:
an ice strategy?
Rick Cunjak
University of New Brunswick
October 1999
At this time of year most salmon anglers and river enthusiasts are putting away their rods and canoes for the winter and dreaming about next summer. However, the Atlantic salmon are still present in our rivers. Having just completed spawning following an exhausting trip that, in some cases, began off west Greenland, these marvelous animals are now preparing to overwinter beneath the ice that covers many of New Brunswick’s rivers for four to five months. How do they do it? How do they survive?

These were the questions that stimulated our winter research of salmon behaviour and their river environment. Surprisingly, despite the large amount of work done on salmon biology, our understanding of their behaviour in winter is embarrassingly poor. And yet, for much of its range in Canada, winter is the predominant season and generally considered to be critical to survival. Therefore, in order to properly conserve this valuable resource, it was felt that we needed to address basic biological questions such as; what are the salmon doing during winter, and what are their habitat needs?
Working with a team of biologists and hydrologists from the Department of Fisheries & Oceans (Moncton) and the New Brunswick Department of the Environment (Fredericton), we spent parts of four winters monitoring the movements of forty-two post-spawned Atlantic salmon, or kelts (the more appropriate term for this life-stage). The research was carried out on the three main branches of the Miramichi River (the Northwest, Southwest, and Little Southwest Miramichi), and tracking covered an area from below head-of-tide and as far as 50km upriver.
The first step was to characterize the winter environment in our rivers. Before we could identify what habitats salmon preferred in winter, it was necessary to determine how comparable that river environment was relative to what we typically measure and see in summer. Ice surveys carried out in six large main river pools indicated that the ice regime was extremely variable between years and between pools. In our rivers, especially in early winter before a complete surface ice cover forms, another type of ice – frazil ice – forms on cold clear nights, on the bottom of the riverbed, usually in fast-flowing shallow reaches of the river. This sticky, slush-like ice often floats downriver during the day and accumulates as a hanging dam beneath a surface ice cover. Such surface ice more typically forms in pools. The result is that many main river pools in the Miramichi accumulate large masses of frazil ice beneath their surface ice cover.
The problem, from a fish’ perspective, is that this ice mass that quickly takes up much of the volume of a pool is also relatively impermeable to water flow. A simple equation of water flow indicates that its value is a function of the area through which it passes times the velocity. In the frazil-filled pool, the reduction in available area for the water to pass through must be compensated by an increase in velocity. The result is that water flow beneath the hanging dam (remember, ice floats) and along pool bottom is extremely rapid. In some of our surveys, 80% of the pool volume was filled with frazil, even in a pool with a maximum water depth of 9.5 metres! In some cases, large deep pools like the one at Big Hole on the Northwest (max. depth = 9.5m) provided less available space than smaller pools with a maximum depth of only three metres.
Compare this condition with the summer when many salmon accumulate in these deep pools, easily holding position in the near static water flow. In winter, one of our divers who managed to “burrow” through the frazil mass was unable to withstand the torrent of water raging along the pool bottom. Salmon, like many fishes in winter, are attempting to conserve energy. As cold-blooded animals, their metabolism is dictated by water temperature and they feed very little. In fact, adult salmon do not feed at all upon entering freshwater to spawn.
Until now, all their energy reserves have been used to reach the spawning grounds and reproduce. In order to survive the winter, they must conserve the little reserves they have left. Therefore, pool bottoms beneath hanging dams are probably one of the worst places to overwinter. This underlines the importance of carrying out research in all seasons when assessing habitat suitability. Extrapolating from ice-free periods (e.g., summer) would lead to erroneous descriptions of winter habitat.
So how do the salmon react? Where do they overwinter? Salmon kelts, both grilse and large multi-sea-winter (MSW) salmon, were captured in the late autumn prior to freeze-up, fitted with radio-tags and released back into the pools where they were captured. The entire procedure took less than 15 minutes per fish. Each salmon had a unique radio frequency, and tracking began immediately after release and continued on a weekly basis for each of three winters. Tracking was accomplished with a hand-held antenna from land, roadways near the river, canoe, or snowmobile.
The results confirmed our predictions regarding the unsuitability of frazil-laden pools. Salmon kelts avoided overwintering in these pools. Instead, the majority of kelts spent much of their winters below the head of tide. The situation was the same for salmon farthest from the head-of-tide (50 km) as for those tagged much farther downriver (less than 5km from tide head). More interesting was the finding that movement to these locations occurred before a complete ice cover had formed on the river. Maximum distances were recorded at this time with relatively little movement for the remainder of the winter. For example, one salmon kelt moved a net distance downriver of seventy-four kilometres by the spring (May), with greater than 80% of this movement happening before December. It seemed that movement to wintering areas of the river was being made before freeze-up and ice accumulation, perhaps because movement thereafter would be limited by ice. During mid- and late-winter, kelts moved little – whether in the river proper or below the head of tide. Average movements during these periods was generally less than three kilometres, compared with ten times that distance in early winter.
Not all kelts moved to below the head of tide. Some kelts remained in the river. These fish seemed to prefer locations near tributary mouths, in the lee of islands, or in “bogans” – backwaters with negligible flow, but also with negligible frazil accumulation. These bogans are rarely used by adult salmon in summer but may indicate a seasonal habitat value previously not realized.